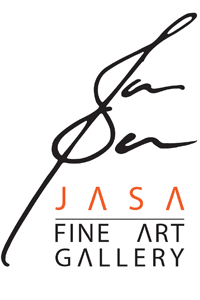 JASA was born and raised on the Dutch Caribbean island of Curacao. He attended Stetson University where he obtained his BS degree in Digital Arts with an emphasis in 3D animation.  After graduation, JASA moved to Miami circa 2002 and after several years in the post-production industry, decided to explore his entrepreneurial skills in a different arena.  JASA founded a thriving technology services company that provides internet, voice and managed IT solutions to commercial, residential, and hospitality businesses. Although happy with his career, his yearning for artistic expression since childhood had never waned.

JASA started shooting pictures with his old DSLR camera and immediately resurrected his long-standing passion to create art. JASA began capturing areas of colors, textures, patterns, shapes, structures and perspectives, merging all of these elements to create surreal images from actual “objects or places”.  Most of his artwork can be challenging to “guess” what it actually is, thereby allowing viewers to interpret their own feelings on the images they see.

He does not edit or “photoshop” his images for imperfections and instead, he develops them using Adobe Lightroom. The process he implements is specifically limited to only a few altering attributes: cropping, contrast, saturation, hue, color and levels. To enhance the viewers’ experience and in some cases signal the setting in which the image was photographed, JASA’s prints on various mediums. These can include various type of photo paper, wood, canvas, or aluminum - custom framed, or other.

He does not want to be considered a photographer.  JASA's resolution is to conceive artwork that appeals to and pleases everyone’s creative imagination by simply using his camera as his brush. Having his own gallery and exhibiting his artwork is an “accidental” dream that has become an artistic reality.

The presence of this badge signifies that this business has officially registered with the Art Storefronts Organization and has an established track record of selling art.

It also means that buyers can trust that they are buying from a legitimate business. Art sellers that conduct fraudulent activity or that receive numerous complaints from buyers will have this badge revoked. If you would like to file a complaint about this seller, please do so here.

This website provides a secure checkout with SSL encryption.

Become a member and be the first to receive new content and special promotions.

Your cart is currently empty.

This is only visible to you because you are logged in and are authorized to manage this website. This message is not visible to other website visitors.

The above preview shows how to use the live preview on this website. The image displayed is just an example, and is not available for sale.

This means you can use the camera on your phone or tablet and superimpose any piece of art onto a wall inside of your home or business.

To use this feature, Just look for the "Live Preview AR" button when viewing any piece of art on this website!

Below, select which favorite lists you would like to save this product into.